Biden Is Blundering Us Into World War 3 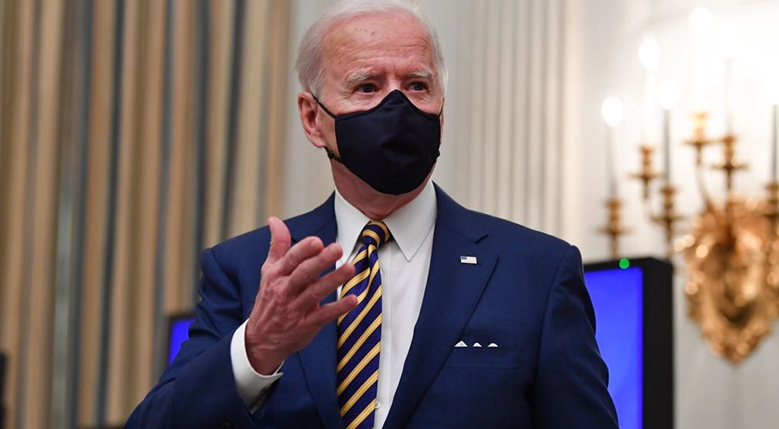 The Joe Biden administration is blundering America into a World War 3 scenario as tensions rise globally. We are looking at a WW3 in which the regime controlling America does not represent the American people, there is zero national cohesion, and there are no clear objectives except the profit-oriented destabilization goals and petty rivalries of the Oligarchs. Such a war is not winnable for the American government, and could spark a massive bipartisan antiwar movement to challenge the bellicose decisions of the Biden regime.

Biden is backing the anti-Vladimir Putin opposition effort in Russia while moving American troops into Syria. Putin is likewise moving Russian troops into Syria to engage in a staredown with the Americans. The Islamic State (ISIS) is back, committing terrorism in Iraq. China is flexing on Taiwan in the South China Sea, sparking U.S. warship entry into the region. Israel is bombing Syria. And Americans are beginning to realize that the globalist Biden regime is leading us blindly, cravenly into potential disaster.

Dozens of civilians were killed or injured at Tayaran Square in Baghdad, Iraq on Thursday after a pair of suicide bombings. “One (terrorist) came, fell to the ground and started complaining ‘my stomach is hurting’ and he pressed the detonator in his hand. It exploded immediately. People were torn to pieces,” reported an observer. Reuters and other news agencies reported that the Islamic State, aka ISIS, took responsibility for the deadly terrorist attack.

ISIS was in retreat during President Donald Trump’s administration as Trump worked in coordination with Putin to bomb and dismantle the ISIS Caliphate in Syria. Trump scored one of his great victories when he took out ISIS leader Abu Bakr al-Baghdadi using the heroic war dog “Conan.” But now, predictably, ISIS returns. ISIS grew out of al Qaeda during the Obama-Biden administration as the Democrats supported al Qaeda in the region, believing the jihadist radicals could be used to topple sovereign potentates including Syria’s Bashar al Assad, a secular pan-Arab leader whose dictatorship threatens Western neoliberal designs on Syrian oil. Wikileaks released an email in which Jake Sullivan, then a Hillary Clinton henchman and now Biden’s choice to run the National Security Agency (NSA), said in no uncertain terms that al Qaeda “is on our side in Syria.” During Obama’s reign, ISIS took control of Syrian oil wells and funded its terrorist activities through black-market oil sales. The US neoliberal regime is determined to build new pipelines through Syria that can move gas into Europe, which would cut Putin out of his role as the chief supplier of the European Union’s energy. Putin is allied with Assad to prevent this from happening. Biden clearly wants to topple Assad — which was a piece of unfinished business from the Obama years — and that is creating a powder keg in the region that is likely to get much worse.

Shortly after taking office, Biden moved a U.S. military convoy from Iraq into oil-filled northeastern Syria accompanied by helicopters and U.S. troops, according to Syrian media. Not to be outdone, Putin sent Russian troops into northeastern Syria to begin a tense staredown that could determine whether or not the U.S. and Russia actually engage in combat at some point in the near future.

Israel, meanwhile, is continuing to bomb Syria, determined to weaken the Assad regime.

Syrian state media SANA reported on a Syrian military source’s statement: “At about four o’clock [02:00 GMT] in the morning today, the Israeli enemy launched an aerial aggression with a barrage of missiles coming from the direction of the Lebanese city of Tripoli, aiming at some targets in the vicinity of Hama governorate. Our air defences confronted the enemy’s missiles and downed most of them…the Israeli aggression resulted in the martyrdom of a family, including a father, mother and two children.”

Even more troubling, the US-Russia conflict is not merely confined to Syria. The Biden administration is now openly backing an effort to challenge the power of Vladimir Putin on Russian soil. The Western mainstream media is going over the top celebrating the supposed virtue of Alexei Navalny, the anti-Putin opposition leader recently arrested in Moscow. Pro-Navalny protests raged outside the Russian embassy in Tel Aviv, Israel, as well as in Russia where about 3,000 protesters got arrested. Leaders on the House Foreign Affairs Committee from both the GOP and the Democrat Party want Biden to investigate Navalny’s supposed poisoning at the hands of Putin. Brazenly, the Biden State Department supported the anti-Putin protests and demanded Navalny’s release from incarceration.  Putin’s spokesman said U.S. embassy support for the protests “indirectly constitute absolute interference in our internal affairs.”

Meanwhile, China is not happy that the Biden regime sent the USS Theodore Roosevelt and three warships into the South China Sea. Taiwan said that China moved into its airspace with fighter jets.

“The United States frequently sends aircraft and vessels into the South China Sea to flex its muscles. This is not conducive to peace and stability in the region,” stated a spokesman for the Chicoms.

Everyone in politics knows that Biden is easily manipulated by the Chinese Communists, who quietly set up a military base in the Bahamas less than 200 miles off the U.S. coast. Look for more erratic and concerning moves from the Biden administration with respect to China as the world situation grows more alarming by the day.

Source : Biden Is Blundering Us Into World War 3