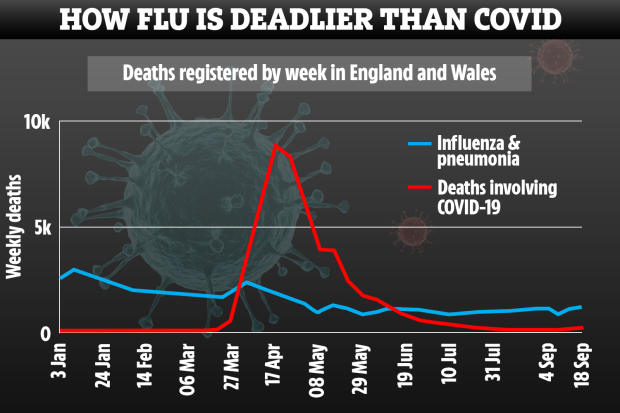 FLU and pneumonia killed 10 times more people in the UK than coronavirus in the last week, official statistics show.

It’s the 14th week in a row in which the seasonal winter bug has claimed more lives than Covid-19 in England and Wales.

The Office for National Statistics said that 14 per cent of deaths registered in the week ending September 18 were caused by flu and pneumonia.

However, the number of weekly deaths involving the deadly bug are beginning to increase – after a two-week dip.

It is the second consecutive weekly rise, with the number of deaths involving Covid-19 up 40.4 per cent from the 99 deaths registered in the previous week.

In the week before that – the week ending September 4 – numbers fell below 100 for the first time since the lockdown was introduced, with 78 deaths registered.

This is said to be due to the impact of the late bank holiday weekend in August – delaying the registration of some deaths to the following week.

The ONS said registered deaths involving Covid-19 increased in six of the nine English regions in the week ending September 18.

The number fell in two regions: south-east England (11, down one on the previous week’s total) and south-west England (five, down two).

It was unchanged in Eastern England on eight deaths.

In Wales the weekly total increased by four, from one to five.

Overall in the UK, 158 deaths were registered in the week ending September 18 involving Covid-19 – 48 deaths higher than the previous week.

The release shows that nearly 57,900 deaths involving Covid-19 have now been registered in the UK.

Some 52,717 deaths involving Covid-19 had occurred in England and Wales up to September 18, and had been registered by September 26, the ONS data shows.

These are cases where Covid-19 was mentioned on the death certificate, including suspected cases.

Experts say that while the increase in deaths is concerning, the current pattern is not as alarming as earlier in the pandemic.

However, they warn that due to the incubation period of Covid-19 it could take some time before a recent rise in infections is reflected in the death toll.

Prof Kevin McConway, a statistician at The Open University, said: “These figures are not too concerning yet, I’d argue, because the weekly numbers of Covid-related deaths were higher than these levels right up to late July or early August, so this is by no means a large spike in deaths.

« But the recent rise in the numbers of infections did not really get started until late August or early September.

« If the rise in infections is going to lead to a corresponding rise in numbers of deaths – that seems very likely but we can’t be completely certain yet – that rise in deaths mostly won’t have showed up yet.