Inflammatory Syndrome Affecting Children: Kawasaki Disease, COVID-19 . . . or Something Else? 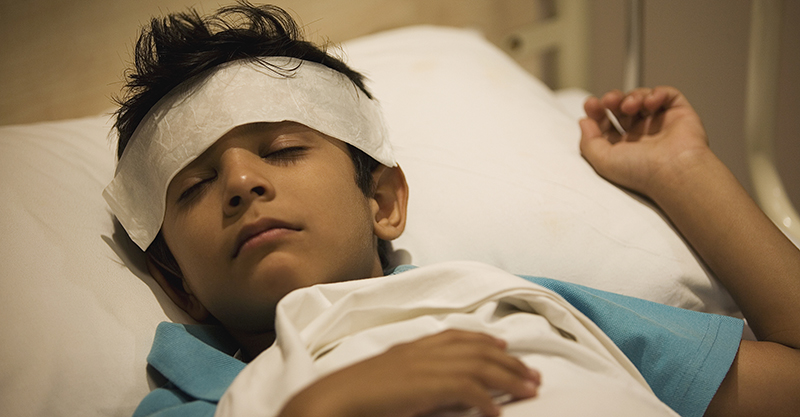 There are many medical uncertainties swirling around the COVID-19 story, but one widely accepted observation has been that children are among the least affected, both in number and symptom severity. At least until recently. In the United Kingdom, elsewhere in Europe and in a handful of locations in the U.S. (including New York, New Haven, Los Angeles and the San Francisco Bay Area), reports are surfacing of a pediatric inflammatory syndrome that many are rushing to blame on COVID-19. New York State has attributed the deaths of up to five children to the mystery ailment that, in some cases, has resulted in multisystem organ failure.

The potpourri of symptoms “striking newborns and teenagers alike” has prompted clinicians to draw comparisons to the rare childhood inflammatory condition called Kawasaki disease (KD) as well as to toxic shock syndrome (a condition resulting from poisoning by bacterial toxins). Years before COVID-19 came on the scene, the CDC estimated that about 5,450 children, primarily under age five, are hospitalized for KD each year in the U.S.—the equivalent of about 15 every day. While rare compared to other childhood diseases, KD attracts concern as the leading cause of pediatric acquired coronary artery disease, with life-threatening aneurysms being a possible outcome.

By early May, while affirming that the new syndrome was “Kawasaki-like,” some researchers were suggesting that “It’s really beyond that” and were latching onto COVID-19 as a convenient explanation—even though, in New York, well under half (40%) of the affected children had tested positive for SARS-CoV-2 with PCR testing. Hypothesizing that the illness could be a late-stage inflammatory reaction to SARS-CoV-2 infection, doctors baptized the apparently new inflammatory syndrome as “pediatric multi-system inflammatory syndrome temporally associated with COVID-19,” later settling on the more acronym-friendly “pediatric inflammatory multisystem syndrome” (PIMS).

… three-fourths of those affected are over age five, including 16% between ages 15 and 19.

What do doctors and scientists really know about “enigmatic” Kawasaki disease?

To ask the right questions about the inflammatory syndrome—including whether it is actually new—and to grasp why some clinicians are making a link with Kawasaki disease, it may be helpful to look at what is known (and not known) about KD. Kawasaki disease was unheard of prior to the 1960s and 1970s, when clinicians started encountering the new set of symptoms simultaneously and independently around the world, eventually naming the affliction after the Japanese researcher who first published his discoveries. Half a century later, researchers still characterize KD as a frustratingly “enigmatic” condition.

Doctors diagnose KD—sometimes called Kawasaki syndrome (KS)—solely on the basis of symptoms. For “classic” or “typical” KD, these include five or more days of high fever plus four out of five of the following: rash on the trunk and groin; extremely red eyes; dry, cracked red lips and a “strawberry-red” swollen tongue; redness and extensive peeling of the hands and feet; and swollen lymph nodes. Clinicians may diagnose “incomplete” KD if the patient has the same extended fever but fewer of the other symptoms.

The children being diagnosed with “PIMS” are displaying some symptoms—fever, rash and eye redness—that are generic not just to KD but also to many childhood illnesses and to vaccine reactions. In countries that routinely give BCG vaccines to infants for tuberculosis protection, clinicians have described “BCGitis” (acute inflammation at the site of prior BCG inoculation) as a useful tool for early KD diagnosis because it is such a widespread and telltale reaction.

Some aspects of the “PIMS” symptom picture are unusual for KD; these include shock, a high prevalence of severe abdominal pain and gastrointestinal symptoms, “markers of cardiac injury higher than typically seen with Kawasaki disease” and inflammation of the heart muscle rather than the coronary arteries. Also atypically, three-fourths of those affected are over age five, including 16% between ages 15 and 19.

… describing human coronaviruses as ‘ubiquitous,’ [Yale University researchers] admitted to being stumped as to why KD would arise only in a relatively small number of children.

In the midst of theories, is there any consensus?

This is not the first time that scientists have tried to pin the blame for KD on a coronavirus. In 2005—in the aftermath of the early-2000s SARS outbreak that first propelled human coronaviruses into popular awareness—Yale University researchers reported identifying a “New Haven coronavirus” (HCoV-NH) in the respiratory secretions of eight children with KD as well as one child with a respiratory tract infection. Noting the longstanding suspicion that an “elusive” infectious agent or an “abnormal immune response to infection” might be the cause of KD, the Yale authors proposed consideration of HCoV-NH as a candidate. However, describing human coronaviruses as “ubiquitous,” they admitted to being stumped as to why KD would arise only “in a relatively small number of children.” There was no follow-up publication.

Later, other researchers proposed that KD could be the manifestation of “an unusual degree of immune activation caused by bacterial and viral protein toxins acting as superantigens”—an explanation that tied together KD and toxic shock syndrome. Proponents of the “superantigen” theory zeroed in on meningococcal bacteria, in particular, suggesting that “a toxin producing meningococcus could cause KD in the same fashion” that toxins produced by Staphylococcus aureus or other bacteria lead to toxic shock syndrome.

Could meningococcal or other vaccines be the culprits?

When researchers conducted studies of the Bexero meningococcal B vaccine in European adolescents and infants from about 2008 to 2010, “most” vaccine recipients experienced skin redness, over half reported high fever and six children developed KS; researchers saw only one case of KS in the control group (who received four other vaccines for seven diseases, but not Bexero). In addition, Bexero produced reports of sudden infant death syndrome (SIDS). Commenting on synergistic effects, researchers noted Bexero’s association with “more solicited systemic adverse events (particularly fever) . . . when coadministered with routine infant vaccines than when these vaccines were administered alone.” In September 2015, the UK became the first country in the world to start administering three doses of Bexero to infants in their first year of life. UK researchers were also the first to publish a report about the new “COVID-19-related” inflammatory syndrome in April 2020.

Last year, Canadian researchers identified KD as a “condition of interest” for pediatric vaccine safety surveillance, citing ongoing reports of KD to passive systems monitoring adverse events following immunization (AEFI). Case reports outside the U.S. have described a temporal association between KD and a wide variety of vaccines, including hepatitis A and B, rotavirus, influenza, DPT or DTaP, pneumococcal vaccines and yellow fever. Although some researchers have sought to exonerate rotavirus vaccines using “low-quality evidence,” the package inserts for both rotavirus vaccines licensed in the U.S. list KD as a serious adverse event. As with Bexero, researchers have speculated about the possibility of either “an independent or combined effect [of rotavirus vaccination] with a concomitantly received immunization.”

Two studies—one conducted in Singapore and one in the U.S.—have highlighted an association between the 13-valent pneumococcal conjugate vaccine (PCV13) and KD:

Italian researchers observed that rates of KS had surged by 10-20 times during the decade and a half coinciding with the largest use of thimerosal in vaccines routinely given to infants by 6 months of age.

Could mercury be playing a role?

Another vaccine-related factor that could be contributing to some of what gets labeled as KD or KS is mercury. In a letter to the editor of Immunologic Research, published in 2016, Italian researchers observed that rates of KS had surged by 10-20 times during the decade and a half “coinciding with the largest use of thimerosal” in vaccines “routinely given to infants by 6 months of age.” According to the authors, about a fifth of reported cases “manifested KS symptoms the same day of vaccination, which raised the suspicion that even single doses of thimerosal-containing vaccines might exert immunoexcitotoxic mechanisms in children.”

In addition to the mercury in vaccines, the Italian authors directed readers’ attention to the association between environmental mercury pollution and KD, as well as the concordance between KD symptoms and the presentation of acrodynia, a now-forgotten childhood condition associated with chronic poisoning from mercury-containing teething powders. A summary of acrodynia (AD) in a 2008 publication illustrates the conspicuous overlap with KD:

The onset of AD is characterized by high fever lasting more than 5 days; a varying rash such as erythematous plaques, or appearing as measles or scarlet fever; swollen lymph nodes, particularly in the neck; bright red, swollen hands and feet; red, irritated eyes without discharge; bright red, irritated mouth, lips, and throat. Neurological, cutaneous, and cardiovascular symptoms are most commonly seen. However, the disease is highly variable; cutaneous symptoms may be mild or lacking while neurological symptoms always seem to be present. It was explained as an infection or nutritional deficiency and it occurred mostly in the teething period.

Other researchers agree that it is reasonable to view KS as an “acute febrile form of acrodynia.” Addressing the question of why only a small subset of the children exposed to thimerosal or other forms of mercury goes on to develop KS, these researchers (writing in 2012) identified a genetic variation (or “single nucleotide polymorphism”) that makes some children “more susceptible to thimerosal-induced autoimmunity and coronary arterial lesions observed in KS.”

Seeking to situate what is happening in a broader context, another doctor reminds us that 12 to 15 cases of KD were occurring daily well before COVID-19; he asks whether COVID-19 may simply offer a convenient diagnostic basket in which to put the otherwise poorly understood disease.

Tough questions that deserve an answer

Circling back around to “PIMS” and its strange parallels with Kawasaki disease and toxic shock syndrome, it is clear that there are a number of questions that need to be asked:

At this juncture, it is likely close to impossible to determine whether “PIMS” is brand-new and whether it is related to COVID-19. Certainly, the increasing descriptions of COVID-19 as a “whole-body” rather than merely respiratory disease have persuaded some clinicians that SARS-CoV-2 is capable of attacking blood vessels and multiple organs. On the other hand, neither PCR nor antibody testing for SARS-CoV-2 is terribly reliable, and a significant proportion of affected children has tested negative on one or both. Why, therefore, have most researchers—along with the entire mainstream media—decided to go on record with their belief that the new pediatric syndrome is linked to COVID-19?

Speaking to the Senate Health, Education, Labor & Pensions Committee on May 12, Dr. Anthony Fauci cited the Kawaski-like inflammatory syndrome as a reason to throw cold water on legislators’ desire to reopen schools this fall, while continuing to beat the drum for a rushed and dangerous COVID-19 vaccine. Although “it is possible the novel coronavirus is playing some contributive role in this rare illness in children,” it is also quite possible that it is playing “absolutely no role” and is, rather, an expedient cover story that may needlessly frighten parents about a rare disease (about 5,000 cases a year) that, before COVID-19, few were talking about. Answers to these questions are hugely important, as they will affect children’s daily lives, shape how the U.S. carries out education and determine so much more.