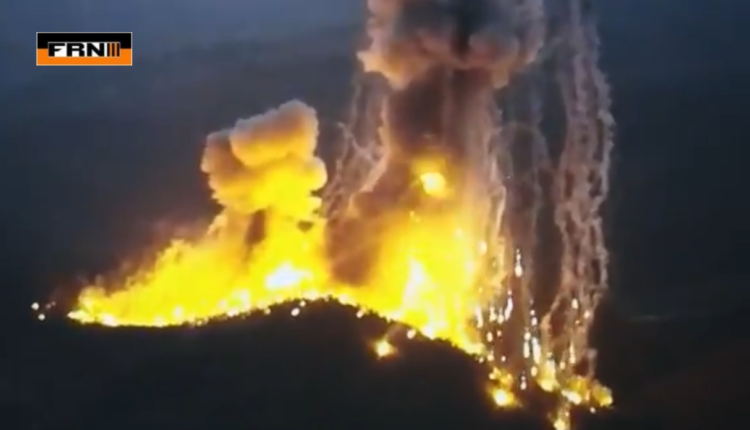 STEPANAKERT – Invading Azerbaijani forces were caught using white phosphorus munitions, banned internationally, in a number of renewed attacks on the Armenian-populated Republic of Artsakh (more widely known as Nagorno-Karabakh), the Ministry of Defense of Armenia announced on October 31.

“This is a gross violation of the international humanitarian law, norms and the principles of customary law, the Geneva Conventions, aiming not only to harm the Defense Army but also create an environmental disaster,” the ministry said in a brief statement.

The Armenian MoD and several media sources shared videos confirming the use of banned incendiary munitions by Azerbaijani forces, which most likely contained white phosphorus.

A few people pointed this out to me, but the video looks more like MLRS rockets with incendiary munitions, possibly BM-21 Grad MLRS 9M22S rounds, than WP. This video is from Ilovaisk in Ukraine on August 14, 2014 showing 9M22S rounds.https://t.co/i9Po20UXFo https://t.co/ESk8Gb2dT9 pic.twitter.com/DkYcsApQVM

The Convention on Certain Conventional Weapons prohibits any kind of use of incendiary weapons against civilians or against military targets in civilian areas. This type of munition is highly flammable, capable of causing great harm to people, and could also provoke the spread of forest fires.

The Ministry of Defense of Azerbaijan called the Armenian claims “groundless.” In a statement, the ministry stressed that the Azerbaijani military allegedly “does not possess weapons which are prohibited by international laws.” There was no comment regarding the videos showing the usage of incendiaries.

Azerbaijan launched a massive attack to seize control of the Armenian-populated Republic of Artsakh (Nagorno-Karabakh) on September 27 with open support from Turkey, which is trying to score a win for its failed Neo-Ottoman project, after suffering a series of humiliating defeats in Syria, Lybia and Greece.

Since September 27, a fierce battle has been ongoing in the disputed region, where Armenian defenders have desperately been trying to hold off attacks by the much better equipped Azeri army. The use of incendiary weapons, in this case, banned white phosphorus munitions, by Azeri forces indicates that Baku is determined to do whatever it takes to seize the Armenian region and drive Armenians out of Artsakh.