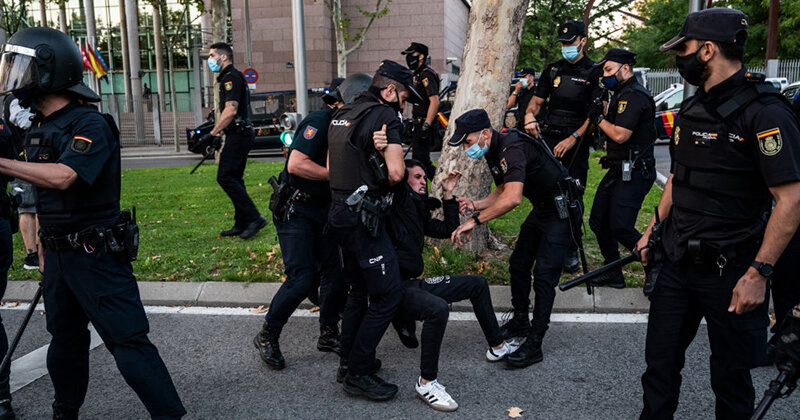 Anti-lockdown protesters in Madrid were met with violence at the hands of police this past weekend, after the local government enacted restrictions in more areas of the capital city.

Restrictions on movement, gatherings of more than six people, and 10pm curfews have been mandated, mostly targeting poorer neighbourhoods where, it is argued, sanitary conditions are worse.

In affected areas, residents are allowed to leave their homes only for work, medical or educational purposes and must carry papers proving that they have been granted permission to do so by the government.

Over a million residents of Madrid are now living under such lockdown conditions, with police having support from the Spanish army in scores of districts.

The political situation in Madrid is somewhat complex.

Many protesters in the locked down low income areas are angry with the conservative regional government, with those more on the left (some extremely leftist) adamant that the localized government lockdown represents class-based discrimination.

Meanwhile other centrist and conservative protesters are just generally against the stripping away of basic freedoms by the central Spanish government, no matter where it is focused.

Footage revealed the chaos after police stormed protesters this past weekend :