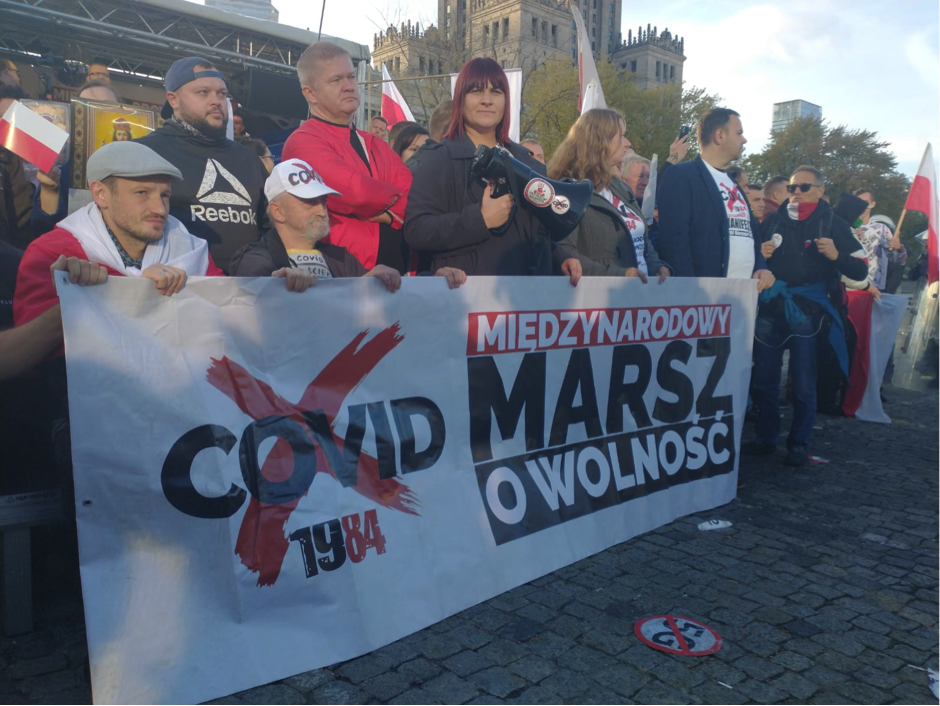 Our March for Freedom was a peaceful and legitimate event. It had been officially registered and authorized by the city authorities.

The National Association for Knowledge about Vaccinations STOP NOP who are part of the ‘Stop COVID 1984’ campaign had announced that the march was a peaceful protest against the current policy of the Polish government and the political and financial global forces at work in the ‘COVID-19 response’. The movement opposes the use of unreliable PCR tests, and scientifically unjustified and unlawfully applied restrictions that have led to the paralysis of the medical care and education, ruined busnisses and the economy further depriving people of security and livehood, and built a totalitarian state threatening our health and our lives.

From October 24th, 2020 the government has intensified the lockdown by prohibiting seniors over 70 from leaving home, as well as children under 16 who are forbidden to leave their place of residence without adult supervision. Restaurants and schools for older children are closed. A red zone was announced throughout Poland. Thousands of us were on the streets. There were foreign guests – speakers such as Angelo Giorgiani an Italian judge president of the international Association ‘l’Eretico’, dr. Gaston Cornu-Labat from the USA and Argentina, Dr. Natalia Prego Cancelo from Spain representing the Association Medicos por la Verdad”, and Dr. Elke de Klerk, founder of the Association “Doctors for Truth” in the Netherlands.

The police wearing helmets and armed with batons cordoned off some of the protesters near the stage area before moving forward to intimidate them. Around 1.30 pm police provoked incidents and made several times use of pepper spray and gas bombs to dipserse the crowd, treating peaceful protesters as dangerous public enemies in an illegal gathering. But the announcement of the government that public gatherings could not exceed five people has only been done the previous day. Warsaw police told the media that they had taken « decisive action against the people gathering on the Plac Defilad whose behavior violated the safety rules issued in the pandemic response. Disregard and blatant violation of the regulations is the reason for our reaction”.

In response to the polices’ call to leave the place of assembly, I asked them to let people go without further harm and so it happened. For some unknown reason the last hundred people including myself and Mr Grzegorz Brown, member of the Polish Parliament were blocked or even arrested. Despite repeated questions asked with the megaphone, we were not told why this all is happening. Our lawyer Arkadiusz Tetela was not allowed to speak to us.

The police told the media that the officers had responded with the use of direct coercion and pepper spray to our ‘aggression and physical attacks’. A hitherto unknown person, not part of our movement, was seen throwing paving stones at them despite our repeated appeals to stop and our constant messages that our protest is peaceful and that we refuse to succumb to violence and provocations.

Two days earlier, the government-controlled Constitiutional Tribunal had issued a verdict on abortion, a subject that strongly antagonizes Polish society. As a result, this brought other groups of people to the streets. Exactly on the same day the Polish Parliament choose to pass the anti-covid law introducing compulsory vaccinations and a number of new restrictions.

The Police told the media that The officers informed people from the very beginning about the sanitary restrictions. Persons who were not following them were considered to be offenders. Fines were issued and when immediate payment was refused, we informed them that the case would further be referred to courts. 200 people have been arrested. Their families do not know where they are being detained.