Who Is James Le Mesurier? – The Former British Army Officer Who Founded The White Helmets 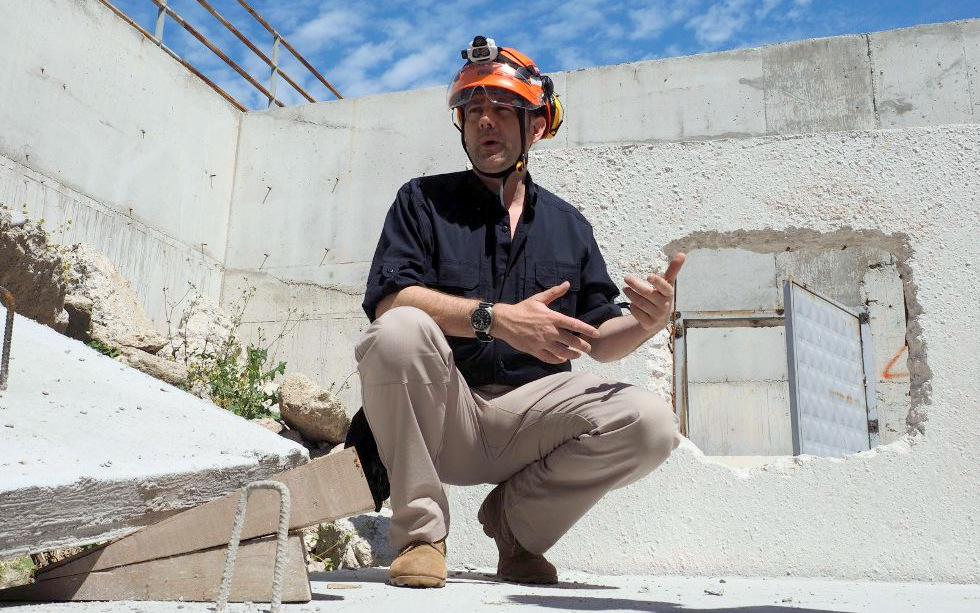 Who is James Le Mesurier, the former British army officer and military contractor who founded the White Helmets, the civil defence organisation which operates exclusively in opposition-held parts of Syria? It is a question more and more people are asking as their role and function comes under increasing scrutiny.

Le Mesurier carries about him the inescapable whiff of Britain’s malign legacy and history of dirty wars, waged in Kenya, Aden, Ireland, Iraq, Libya, in other words wherever London’s blood-soaked imperialist foot has tread around the world. A product of Britain’s prestigious Royal Military Academy of officer training at Sandhurst, he served in various UK military/NATO military deployments over the past three decades, specifically Bosnia, Kosovo, Iraq and Lebanon.

In a short bio describing Le Mesurier’s work with the White Helmets, we are informed, “In addition to the White Helmets in Syria, Mayday is active in Mogadishu, developing the city’s emergency services network, and exploring the development of similar community-based resilience initiatives in other fragile and failing states (my emphasis).”

The question of why a given state becomes fragile and failing is of course neither asked nor explored, for doing so would dredge up the subject of imperialism, which for Western ideologues such as Mr Le Mesurier would be akin to a vampire being exposed to daylight.

In a wide ranging 2016 article, former US marine and UN weapons inspector, Scott Ritter, provides a forensic account of Le Mesurier’s background, including the time he spent in and around the murky world of private military contractors, who exist in the cracks of Western military deployments, able to operate beyond the inconvenient glare of public scrutiny and accountability.

“the organizational underpinnings of the White Helmets can be sourced to a March 2013 meeting in Istanbul between a retired British military officer, James Le Mesurier—who had experience in the murky world of private security companies and the shadowy confluence between national security and intelligence operations and international organizations—and representatives of the Syrian National Council (SNC) and the Qatari Red Crescent Society. Earlier that month, the SNC was given Syria’s seat in the Arab League at a meeting of the league held in Qatar.”

So here we have a civil defence organisation being established in Syria by an ex-British army officer, a man with a background in the shadowy world of private security, in conjunction with a Syrian opposition group in exile. This civil defence organization, the White Helmets, receives funding from an array of states with a clear agenda of regime change in Syria, evidenced in the material, financial and political support they have given various armed opposition groups involved in the conflict.

In a 2015 speech Le Mesurier provides a précis of the roots of the conflict in Syria, starting with in 2011 a “volunteer uprising against the ruthless dictator, Bashar al-Assad,” before going on the assert that in 2012 the Syrian state turned its weapons on its “own people.”

Glaringly absent from this Manichean narrative is the fact that by 2012 various Salafi-jihadi groups, their ranks filled by thousands of extremists from outwith Syria, were rampaging across the country slaughtering and raping and terrorizing the very “own people” the Syrian army and its allies have been fighting to protect, save and liberate from the clutches of this latter day Khmer Rouge. And lest anyone has forgotten, the Syrian Arab Army is indistinguishable from the Syrian people, considering that its soldiers are drawn from the non-sectarian and multi-religious mosaic that makes up Syrian society.

Returning to Scott Ritter: “In this day of social media, it didn’t take long for photographs and video clips of known White Helmet members, in their distinctive uniform, openly celebrating with Al Nusra fighters in the aftermath of Syrian government defeats, and even carrying weapons, something their status as neutral first responders strictly prohibits.”

From the White Helmets’ own website, the lack of neutrality Ritter asserts is unambiguously expressed with the statement posted on its front page by Raed Saleh, the operational head of the organisation and himself a figure of some controversy. Saleh writes, “the UN Security Council must follow on its demand to stop the barrel bombs, by introducing a ‘no-fly zone’ if necessary.”

The barrel bombs referred to by Saleh, and emphasised by Le Mesurier as emblematic of the brutality of the ‘Assad regime,’ are inarguably indiscriminate and illegal under international law. But if we are judging the merits or demerits of a given side in a given conflict based on the use of indiscriminate weapons alone then regime change in Washington, Tel Aviv and Riyadh is long overdue.

The brutality of the conflict in Syria is a reflection of the monumental stakes involved in the outcome. The conflict is in itself is a crime, but are we seriously suggesting that Libya is better, safer and more stable seven years on from the toppling and murder of its leader Muammar Gaddafi, courtesy of NATO aligning with various Libyan opposition factions, prime among them Islamists, in 2011? And are we seriously arguing that Syria’s fate would not be Libya’s fate in the event of the toppling of Bashar al-Assad? And, too, is anybody able to maintain with a straight face that Bashar al-Assad does not enjoy the solid support of the majority of the Syrian people, who understand that the conflict is not about saving their government but saving their country?

“the White Helmets function as an effective propaganda arm of the anti-Assad movement…With their training, equipment and logistical sustainment underwritten exclusively by donations from Western governments (primarily the U.S. and U.K.), the White Helmets serve as a virtual echo chamber for American and British politicians and officials.”

Given Le Mesurier’s background, along with the evidence of how the White Helmets operate, it is reasonable to assume that what we have is the cultivation of the very Third Force Washington and London have been extending themselves in trying to locate and sell as the ‘good guys’ since the conflict began, doing so with the objective of enlisting domestic public support for intervention and regime change in Damascus.

Of course, there is always the possibility that Mr Le Mesurier is sincere in his desire to alleviate the undoubted suffering of the Syrian people – though in his case clearly not all the Syrian people, what with White Helmets only functioning and operating in opposition controlled territory, places where neither he nor any Western supporter of the White Helmets would dare set foot, knowing the moment they did they would be abducted, tortured, and brutally murdered.

But if so, if Mr Le Mesurier is sincere, then he is Britain’s answer to Pyle, the idealistic and naïve American interventionist in French-occupied Vietnam created by Graham Greene in his classic novel The Quiet American. To wit:

“He was young and ignorant and silly and he got involved. He had no more of a notion than any of you what the whole affair’s about, and you gave him money and York Harding’s books on the East and said, ‘Go ahead. Win the East for democracy.’ He never saw anything he hadn’t heard in a lecture hall, and his writers and his lecturers made a fool of him.”

John’s work appears regularly at RT, Counterpunch, the Morning Star, and he is a regular commentator on BBC Radio Scotland.

via Who Is James Le Mesurier? – The Former British Army Officer Who Founded The White Helmets – American Herald Tribune